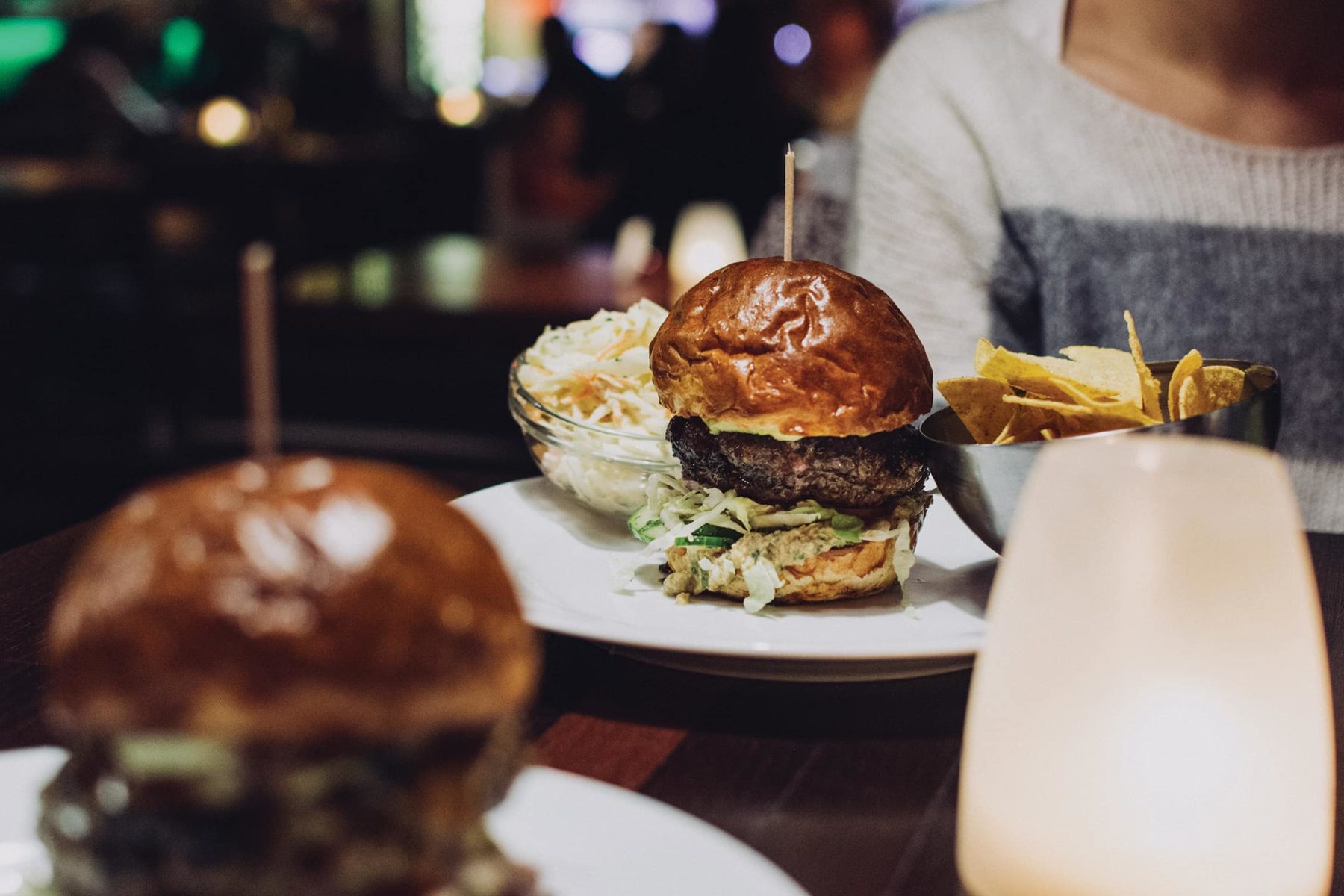 Recently, Burger King, the second-largest burger chain in the U.S., announced it would begin serving another version of the iconic Whopper using an all-vegetarian patty. Burger King’s adoption of this plant-based, alternative patty is a big move in the primarily beef-focused foodservice arena, providing consumers greater access to alternative proteins. What does this mean for the beef industry? 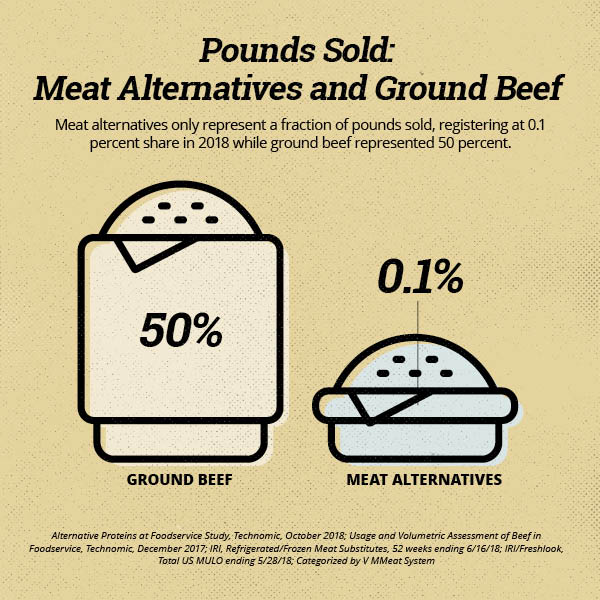 Well, Americans love beef, especially burgers. It’s a fact. Americans consume roughly 50 billion burgers a year, with the average American eating three hamburgers a week1. There is even a national day dedicated to the love of the hamburger. National Burger Day, a day of appreciation for hamburgers, fell on May 28th this year. In 2018, ground beef accounted for 40 percent of dollar sales and half of last year’s pound sales2. All of these facts confirm that beef is what consumers continue to love, buy and eat.

Still, more and more restaurants and stores are offering plant-based alternative proteins to give their consumers greater variety on their menus and their shelves. Many restaurants and food service businesses that have latched onto this trend. While the trend is still growing, it is important to note that meat alternatives only represent a fraction of pounds sold, registering at 0.1 percent share in 20183.

The main selling points for companies producing plant-based, alternative proteins revolve around the environment, nutrition and animal welfare. They contend plant-based proteins require fewer natural resources, including water and land, and emit fewer greenhouse gases when compared to the beef production system. Another view is based upon the common misconception that red meat is bad for the human diet. Lastly, these companies use emotional tactics to tell consumers that, by opting to eat plant-based proteins, they can keep animals from being slaughtered and consumed.

These selling points may attract a certain type of consumer. However, the Beef Checkoff has taken significant measures to bring beef to the consumer forefront and position it as one of the world’s most desirable proteins.

When it comes to sustainable production processes, the beef industry has moved forward in leaps and bounds. Producers are constantly looking for new ways to produce more beef with fewer resources. In fact, today, U.S. beef farmers and ranchers are able to produce the same amount of beef with one-third fewer cattle than they did in 19774. The checkoff-funded lifecycle assessment gives consumers and the industry a clear picture as to what beef sustainability looks like today.

When it comes to health, the Beef Checkoff works with dietitians and physicians regularly to educate them on the health benefits of including beef in an everyday diet. The checkoff-funded Beef. It’s What’s For Dinner. brand serves as the consumer-facing resource dedicated to educating individuals through webinars, seminars, fact sheets, cooking lessons, nutrition research and more on the ways lean beef contributes to a healthy lifestyle. Research shows that consumers consider beef one of the best sources of protein5. 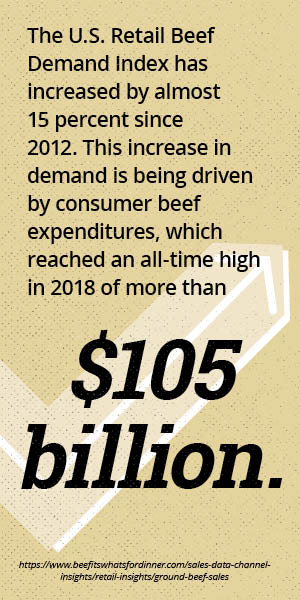 Ironically, meat eaters are the target audience for many of the companies promoting plant-based, alternative proteins. Their campaigns have centered around their products’ amazing similarity, texture and taste compared to beef. On April Fools’ Day, Burger King “fooled” some beef-loving restaurant goers into thinking they were eating the Whopper’s original beef patty when they were actually eating the newly introduced plant-based patty instead. The reaction was overwhelming, with many saying they couldn’t believe how alike the two options tasted.

“Beef has one ingredient—beef. While plant-based alternatives, consisting of dozens of ingredients, have demonstrated similarities to beef, it’s important that consumers understand exactly what they’re eating and where it came from,” states Janna Stubbs, Cattlemen’s Beef Board member from Alpine, Texas. “The beef industry has worked hard to be transparent and give consumers the high-quality beef they seek and trust to feed their families.”

The Beef Checkoff has dedicated valuable resources toward consumer and market research to determine how consumers think about beef and alternative proteins, as well as where they are spending their protein dollars. In 2019, annual projected beef consumption is more than 58 pounds per capita versus beef substitutes measuring in at a few ounces per capita6. Furthermore, the U.S. Retail Beef Demand Index has increased by almost 15 percent since 2012. This increase in demand is being driven by consumer beef expenditures, which reached an all-time high in 2018 of more than $105 billion7.

Consumer marketing is also a big priority. For consumers to continue buying beef, the Beef Checkoff must invest in initiatives that increase beef’s visibility and appeal. The Beef. It’s What’s For Dinner. brand has created a series of social media ads that clearly position beef as one of the top proteins and address meat alternatives head on.

The Beef Checkoff also targets consumers who are actively searching for information on topics like beef sustainability—effectively disputing the claims made by companies producing plant-based alternatives—and driving them toward the Beef. It’s What’s For Dinner. website for accurate information.

The Beef Checkoff works to leverage resources in the most impactful areas so producers can be confident that consumers are purchasing their superior products. Listening to consumers and adapting to their purchasing decisions are key to the beef industry’s success. Much is still on the horizon when it comes to alternative proteins, but the Beef Checkoff will continue to identify ways to position beef as the number one protein choice amongst consumers and drive demand for beef. 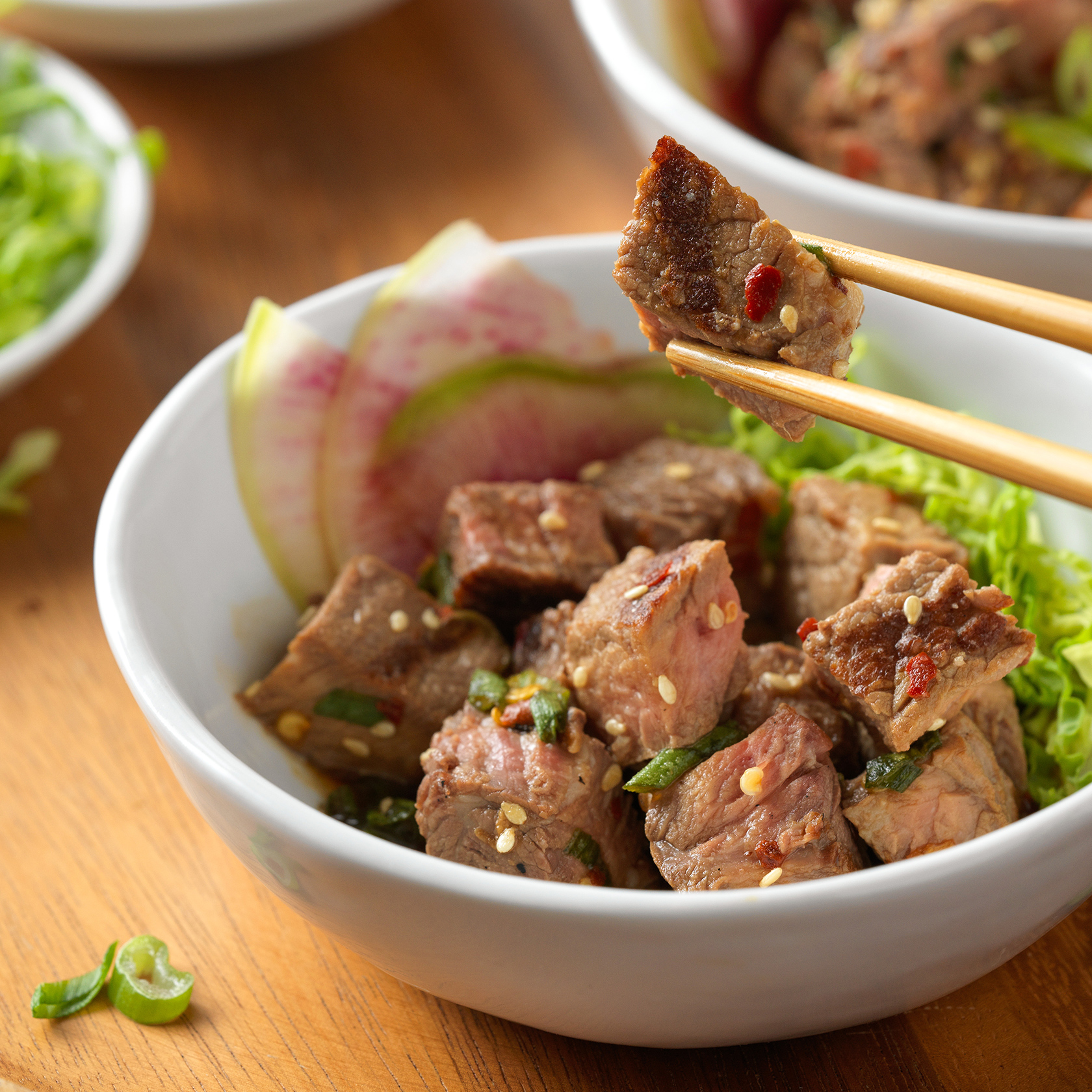 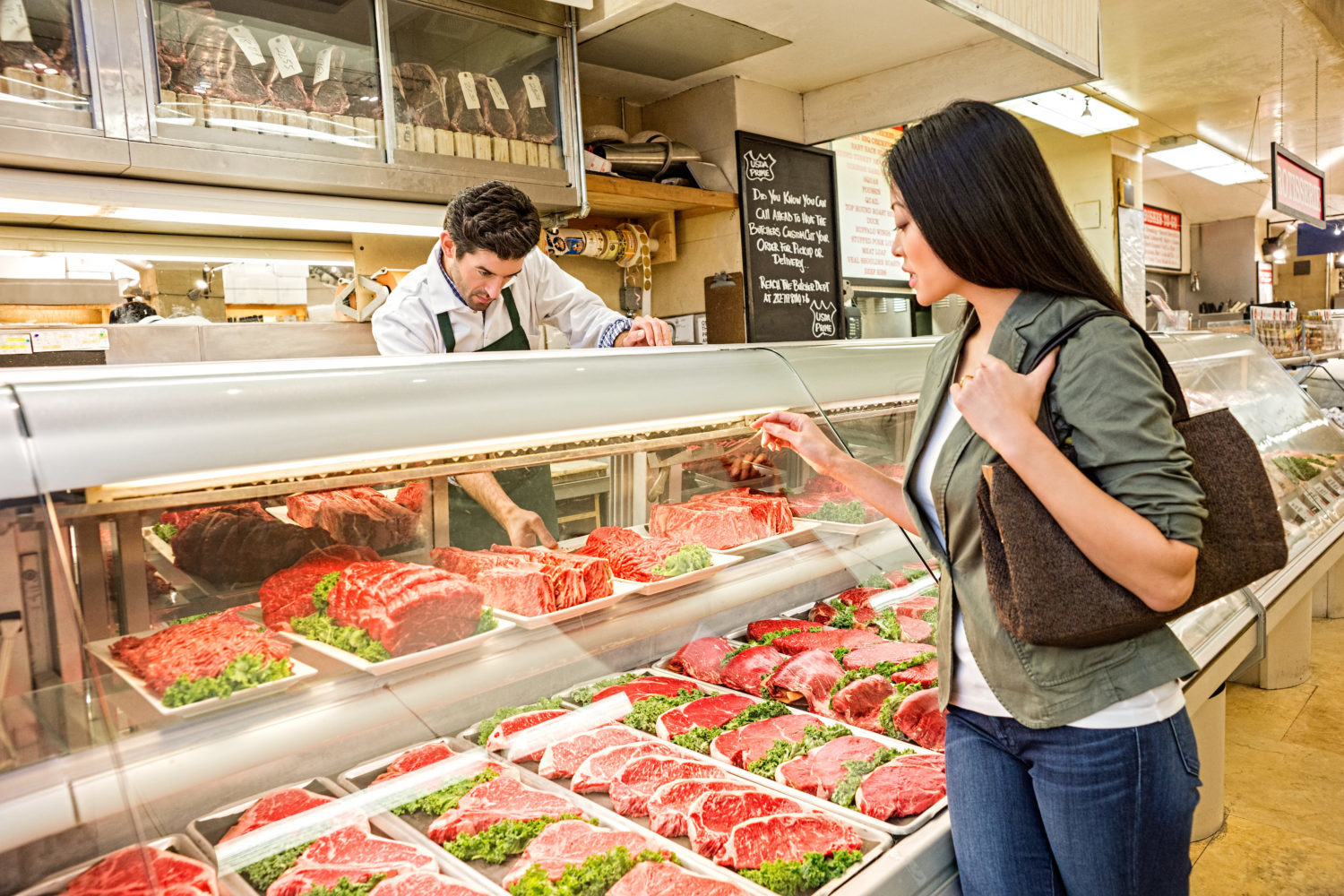 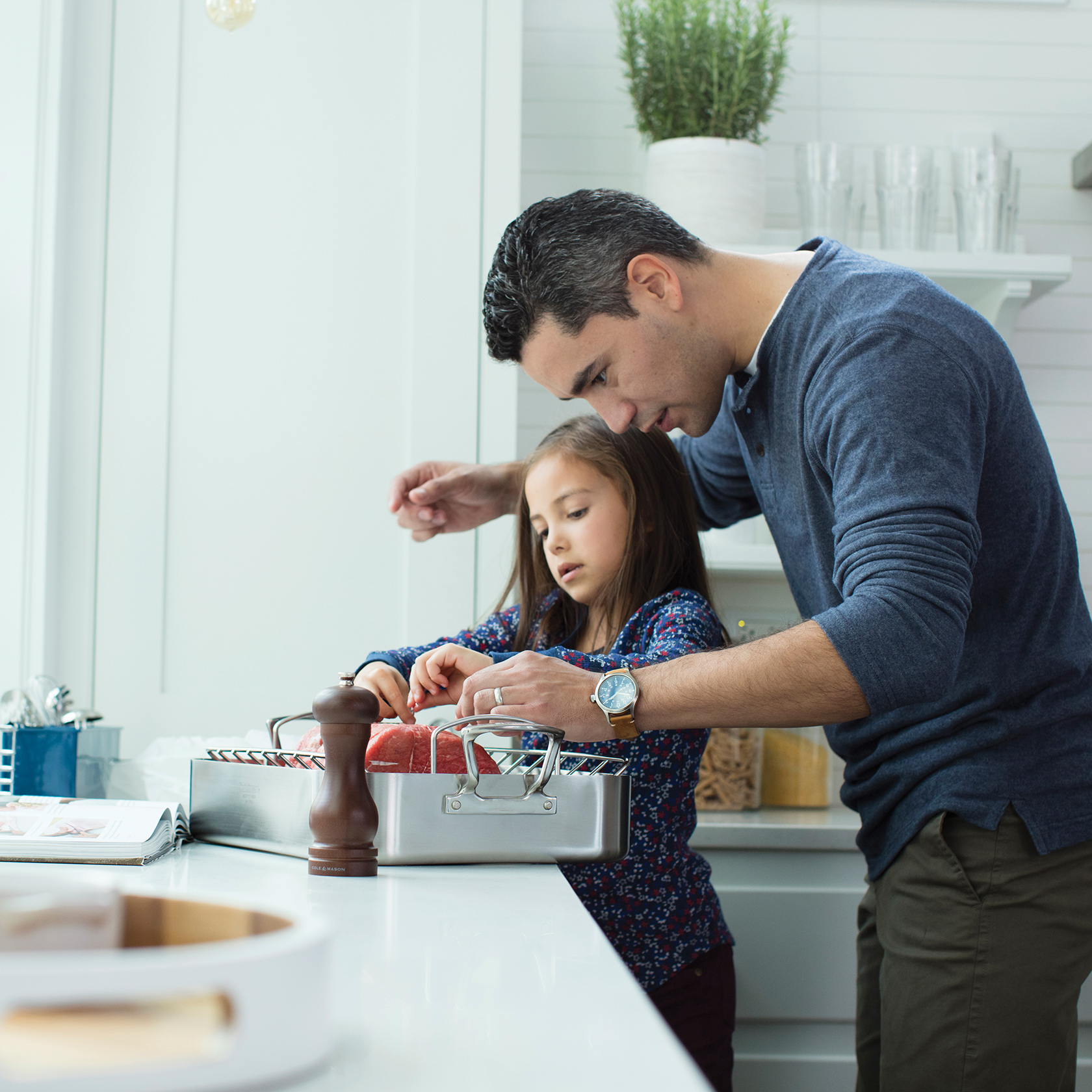