The Beef Checkoff – Throughout the Years 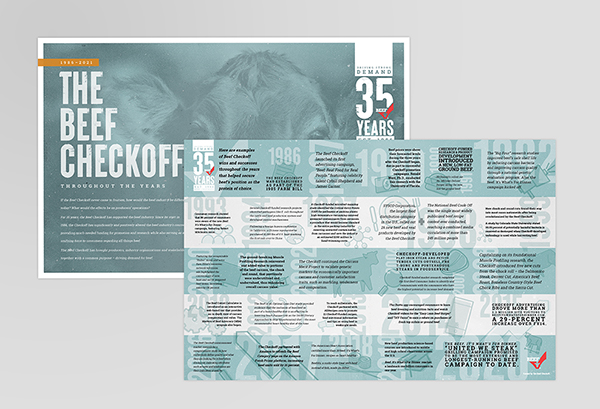 Here are examples of Beef Checkoff wins and successes throughout the years that helped secure beef’s position as the protein of choice.

1989 – Beef prices were above their forecasted levels during the three years after the Checkoff began, due in part to successful Checkoff promotion campaigns. Ronald Ward, Ph.D., conducted this research with the University of Florida.

Following a foreign buyers conference in California, a Chinese representative purchased 41,000 lbs of U.S. beef, marking the first sale ever to China.

1997 – A Checkoff-funded microbial-mapping study identified the Critical Entry Points (CEP) for pathogens at packing plants; high-temperature vacuuming removed unwanted contaminants from carcasses, a procedure that would become standard in the entire packing industry for removing unwanted contamination from carcasses and save the industry an estimated $200 million in hand-trimming costs.

1998 – SYSCO Corporation, the largest food distribution company in the U.S., rolled out 26 new beef and veal products developed by the Beef Checkoff.

The National Beef Cook-Off was the single most widely publicized beef recipe contest ever conducted, reaching a combined media circulation of more than 245 million people.

1999 ­– New chuck and round cuts found their way into meat cases nationwide after being revolutionized by the Beef Checkoff.

A study by Colorado State University stated 99.99 percent of potentially harmful bacteria is removed or destroyed when Checkoff-developed technology is used while harvesting beef.

2001 – The ground-breaking Muscle Profiling Research reinvented and added value to portions of the beef carcass, the chuck and round, that previously were underutilized and undervalued, thus enhancing overall carcass value.

2002 – The Checkoff continued the Carcass Merit Project to validate genetic markers for economically important carcass and customer satisfaction traits, such as marbling, tenderness and composition.

2007 – Checkoff-funded market research completed the first Beef Consumer Index to identify and communicate with the consumers who have the highest potential to increase beef demand.

2010 – The Beef Cutout Calculator is introduced as an interactive web-based tool that provides an in-depth view of carcass composition and value. The Masters of Beef Advocacy (MBA) program also began.

2012 –The Beef in an Optimal Lean Diet study provided evidence that the inclusion of lean beef as part of a heart-healthy diet is as effective in lowering heart disease risk as the DASH (Dietary Approaches to Stop Hypertension) diet — the most recommended heart-healthy diet of the time.

2013 –To reach millennials, the Checkoff partnered with AllRecipes.com to promote 21 Checkoff-funded recipes, beef nutritional information and tips on using beef in weeknight meals.

2014 – The Ibotta app encouraged consumers to learn beef-freezing and nutrition facts and watch Checkoff videos for the “Easy Lean Beef Burger” and “DIY Tacos” to earn a rebate on purchases of fresh top sirloin or ground beef.

2016 – The Beef Checkoff commissioned market research for a comprehensive study on how millennials define quality and what they are looking for in beef when dining out, indicating attributes such as taste and tenderness are their indicators of quality.

2017 –The Checkoff partnered with Amazon to refresh the Beef Category page on the Amazon Fresh Prime platform, increasing beef units sold by 16 percent.

Beefshi, a sushi-style treat with beef instead of fish, made its debut.

2019 – New beef production science-based courses are introduced to middle and high school classrooms across the U.S.

Beef. It’s What’s For Dinner. reaches a landmark one billion consumers in one year.

2020 – The Beef. It’s What’s For Dinner. “United We Steak” grilling campaign promised to be the most extensive and longest-running beef campaign to date.

Meet Your Cattlemen’s Beef Board Members