Dr. Billy Powell of Washington County, Alabama was presented with the Cattlemen’s Beef Board’s second annual Beef Checkoff Visionary Award during the General Session of the 2022 Cattle Industry Summer Business Meeting in Reno, Nevada. This honor recognizes an individual in the beef industry who has demonstrated exemplary support of and commitment to the Checkoff’s goals and vision.

“Dr. Powell has been deeply involved with the Beef Checkoff since it was passed back in 1985,” said Norman Voyles, Jr., 2022 chair of the Cattlemen’s Beef Board (CBB). “His knowledge of the beef industry goes back decades, and his leadership and ingenuity helped smooth out many of the bumps in the road that the Checkoff experienced, especially in those early years. Dr. Powell is truly deserving of this Visionary Award.”

A native of Leroy, Alabama., Powell grew up on a farm, receiving his first cow when he was just two years old. Over the years, Powell’s family raised timber, along with commercial and registered cattle, primarily the Red Angus breed. He attended Auburn University’s College of Agriculture where he earned his bachelor’s degree in animal sciences in 1966, going on to earn his Ph.D. in meat science in 1970. Powell then became a food science specialist for the Alabama Cooperative Extension service at Auburn University from 1971-1975. He eventually took a position closer to home with Lapeyrouse Grain Company, and when his father passed away shortly thereafter, Powell and his mother co-managed the family’s cattle herd.

Under Powell’s leadership and vision, the State Beef Councils organized to have a collective voice in the national Beef Checkoff program. After the Beef Industry Council and the National Cattlemen’s Association merged to become the National Cattlemen’s Beef Association (NCBA), Powell was instrumental in getting the Federation of State Beef Councils to meet independently, strengthening their efforts to promote beef. Powell also worked with others to develop the concept of a State Marketing Plan template that ensured state efforts would complement the national Checkoff’s efforts rather than dilute them. As the purchasing power of the national Beef Checkoff decreased over the years, Powell’s forward thinking spurred Alabama and other states to pass their own $1-per-head checkoffs, providing additional funding for their promotional programs.

One of Powell’s proudest achievements was the establishment of The MOOseum at the Alabama Cattlemen’s Association. Opened in 1995 under his guidance, The MOOseum became the premier venue for children and adults to learn more about Alabama’s beef cattle industry.

“Being named the 2022 Beef Checkoff Visionary Award recipient is a tremendous honor, and I appreciate it very much,” Dr. Powell said. “It’s icing on the cake for a South Alabama country boy who spent a lifetime working in the cattle industry. There are many individuals I’d like to thank for nominating me and working with me throughout the years, because if I’ve accomplished anything, it’s been with the help of others. I still truly believe the Checkoff dollar is the best investment that a producer can make.”

“Dr. Powell’s tireless efforts over the years shaped the Beef Checkoff as we know it today,” said Greg Hanes, CEO of the Cattlemen’s Beef Board. “Furthermore, his knowledge and vision helped create mutually beneficial relationships between the national program and the State Beef Councils. Dr. Powell has always had faith in the power of the Beef Checkoff. He’s worked hard for what he believes is right, and we are all the better for it. All of us at the CBB congratulate Dr. Powell on receiving this very well-deserved Visionary Award.” 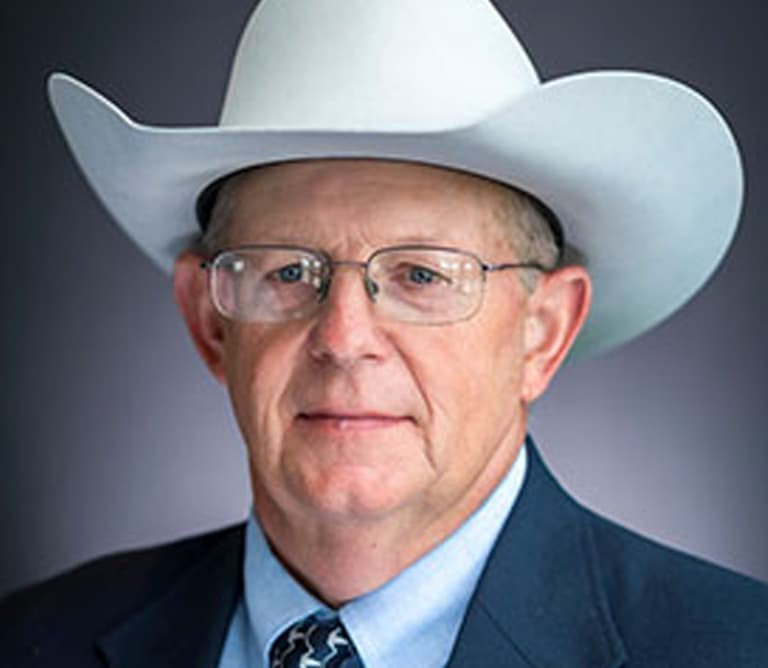 As I’m writing this, we’re witnessing another potential “black swan” chain of events. The war in Ukraine, too much moisture in the Eastern Corn Belt, and too little in the Western Corn Belt have significantly delayed spring planting.

These events have led to grain prices rising to near historical highs and contributed to high energy prices. According to the USDA, corn is $1.67 per bushel higher than last March. Diesel fuel is now an incredible $2.26 higher here in the Midwest than it was a year ago – and it’s gone up by even more on the East and West Coasts. Fertilizer has more than doubled its 2021 prices. Prices on inputs such as seeds and pesticides are also higher.

Yet, somehow, beef demand remains high. How is that possible with near-record retail beef prices and the numerous transportation issues we face? The Beef Checkoff has been working to consistently build beef demand over the past 36 years. And, that success is due in large part to the dedication of Cattlemen’s Beef Board (CBB) members and our contractor partners.

By working together to develop and fund innovative promotion, education and research programs, the CBB and its contractors have used Checkoff dollars to:

To continue doing this important work, we need more involved, dedicated individuals to join the CBB.

The USDA is currently seeking nominees for the Beef Board, and a list of certified producer organizations, nomination form and information about the CBB are available on the AMS-CBB webpage. Throughout the full nomination process, the industry must conduct extensive outreach, paying particular attention to reaching underserved communities, and consider the diversity of the population served and the knowledge, skills, and abilities of the members to serve a diverse population. A total of 39 three-year term seats must be filled next February (38 producers and 1 importer). Of those, 21 seats are occupied by members eligible for an additional three-year term; the remaining 18 have served two consecutive terms and will be termed out.

As a producer and Beef Checkoff investor, I am extremely proud of the work our contractor partners are doing, and I’m excited to see the proposals they’ll bring forward for FY23. If you know someone with a passion for the beef industry and a unique perspective to share, I encourage you to nominate them for one of our open seats. Fresh ideas and enthusiasm are essential to continue building beef demand, not just for today or even tomorrow, but well into the future.

Missouri dairy producer Alfred Brandt was recently appointed to the Cattlemen’s Beef Board and will serve on the Safety and Product Innovation Committee. “I am looking forward to sharing dairy’s role in the Beef Checkoff and working with cattlemen from across the country to have our voice heard,” Brandt said.

Get to Know Your Cattlemen’s Beef Board Members – Tammy Bartholomew