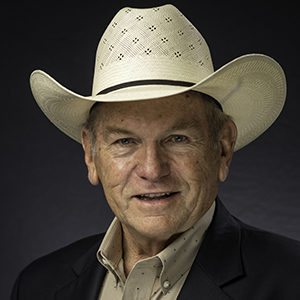 Bill has owned the Bill King Ranch for 45 years. It includes a cow-calf operation and feedlot, as well as 4,000 acres of corn, hay and wheat crops. He was nominated to the Cattlemen's Beef Board by the New Mexico Cattle Growers. He attended New Mexico State University. In his community, Bill has served as secretary of the Edgewood Solid Water Conservation District and as a board member for the Central New Mexico Electric Coop. He also has been active in agricultural organizations and is a past president of both the American Hereford Association and the New Mexico Cattle Growers; a past regional vice president of the National Cattlemen's Beef Association; and a past board member for the Texas Cattle Feeders Association. The U.S. Secretary of Agriculture appointed Bill to the Cattlemen's Beef Board for service beginning in 2016.